Mills' The Racial Contract (1997) is essential reading - short and generally accessible (the philosophy might be a challenge for those outside of it), but well worth struggling through. Charles W. Mills is currently at City University of New York and has written a number of books (reviews of others to come). The book seems to be available here, via the Publisher. A selection of notes from this book:

"White supremacy is the unnamed political system that has made the modern world what it is today. You will not find this term in introductory, or even advanced, texts in political theory. A standard undergraduate philosophy course will start off with Plato and Aristotle, perhaps say something about Augustine, Aquinas, and Machiavelli, move on to Hobbes, Locke, Mill, and Marx, and then wind up with Rawls and Nozick. It will introduce you to notions of aristocracy, democracy, absolutism, liberalism, representative government, socialism, welfare capitalism, and libertarianism. But though it covers more than two thousand years of Western political thought and runs the ostensible gamut of political systems, there will be no mention of the basic political system that has shaped the world for the past several hundred years. And this omission is not accidental. Rather, it reflects the fact that standard textbooks and courses have for the most part been written and designed by whites, who take their racial privilege so much for granted that they do not even see it as political, as a form of domination. Ironically, the most important political system of recent global history—the system of domination by which white people have historically ruled over and, in certain important ways, continue to rule over nonwhite people—is not seen as a political system at all. It is just taken for granted; it is the background against which other systems, which we are to see as political, are highlighted. This book is an attempt to redirect your vision, to make you see what, in a sense, has been there all along." (p. 1-2)

"What is needed, in other words, is a recognition that racism (or, as I will argue, global white supremacy) is itself a political system, a particular power structure of formal or informal rule, socioeconomic privilege, and norms for the differential distribution of material wealth and opportunities, benefits and burdens, rights and duties." (p. 3)

"All whites are beneficiaries of the Contract, though some whites are not signatories to it." (p. 11)

"In philosophy one could trace this common thread through Locke's speculations on the incapacities of primitive minds, David Hume's denial that any other race but whites had created worthwhile civilizations, Kant's thoughts on the rationality differentials between blacks and whites, Voltaire's polygenetic conclusion that blacks were a distinct and less able species, John Stuart Mill's judgment that those races "in their nonage" were fit only for "despotism." The assumption of nonwhite intellectual inferiority was widespread, even if not always tricked out in the pseudoscientific apparatus that Darwinism would later make possible. Once this theoretical advance had been made, of course, there was a tremendous outpouring of attempts to put the norming on a quantifiable basis—a revitalized craniometry, claims about brain size and brain corrugations, measurings of facial angles, pronouncements about dolichocephalic and brachycephalic heads, recapitulationism, and finally, of course, IQ theory—the feature putatively correlated with intelligence varying, but the desired outcome of confirming nonwhite intellectual inferiority always achieved." (p. 59-60)

"By the social contract's decision to remain in the space of the European nation-state, the connection between the development of this space's industry, culture, civilization, and the material and cultural contributions of Afro-Asia and the Americas is denied, so it seems as if this space and its denizens are peculiarly rational and industrious, differentially endowed with qualities that have enabled them to dominate the world." (p. 74)

"...in a racially structured polity, the only people who can find it psychologically possible to deny the centrality of race are those who are racially privileged, for whom race is invisible precisely because the world is structured around them, whiteness as the ground against which the figures of other races—those who, unlike us, are raced—appear. The fish does not see the water, and whites do not see the racial nature of a white polity because it is natural to them, the element in which they move." (p. 76) 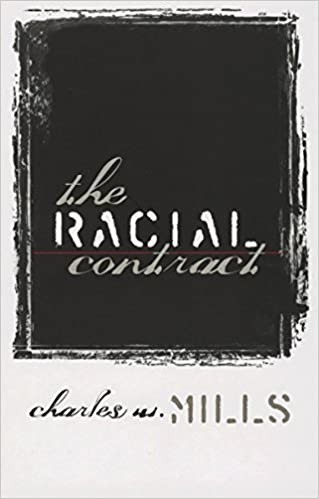